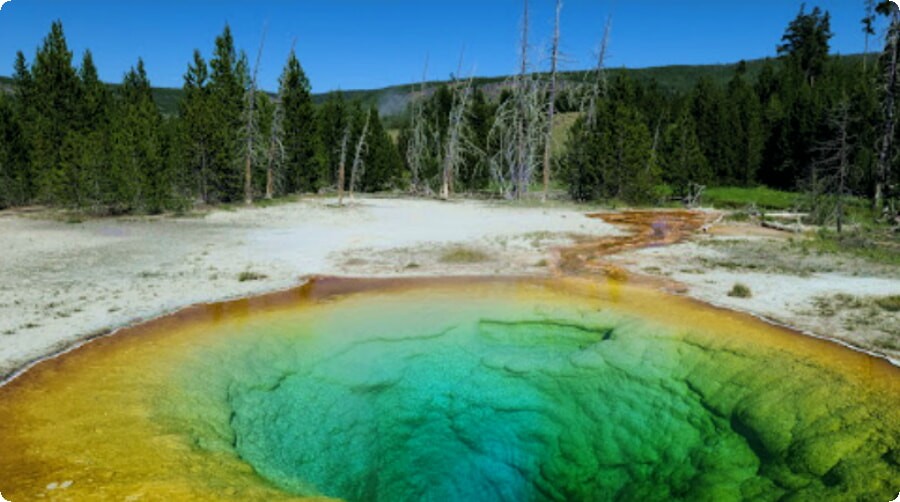 Yellowstone National Park was officially established on March 1, 1872, becoming the very first protected national park in the world. Yellowstone is known for its geothermal springs, as well as for the animal species that live there, among which are grizzly bears, wolves and bison.

The national park is surrounded by the Rocky Mountains at an altitude of about 2500 meters above sea level. The total area of ​​the reserve is about 9000 sq. km. In 1978, the giant volcanic bowl located in the United States, which is the remnant of a grandiose supervolcano, was declared a World Natural Heritage Site by UNESCO.

Located in northwestern Wyoming, the park was the first nature reserve created by the US government to preserve the unique nature. Here, in the natural environment of the wild, live the last populations of wild bison, elk, coyotes, wolves and bears in the vastness of the United States.

From a geological point of view, the reserve has such a feature that it is located above the so-called hot zone of the earth's crust, which is a melt zone inside the earth's mantle.

The park has many water resources, ranging from the Yellowstone River with its waterfalls to numerous small lakes, including Yellowstone Lake.

Americans are very fond of fishing on local trout-rich rivers, and with some luck, a very decent catch can be pulled out of the river.

In the summer months, especially in July and August, many people flock to the park to get close to nature, live in tents and wander among the wild. In winter, many people come here to ski or ride a snowmobile.

What to see in the park first

The Grand Loop Road is home to many attractions, including the limestone terraces of the Mammoth Hot Springs, the Gibbon Falls, and Obsidian Rock.

Also worthy of attention are the Fountain Paint Pot, skiing on the Firehole River and the Grand Prismatic Spring hot spring.