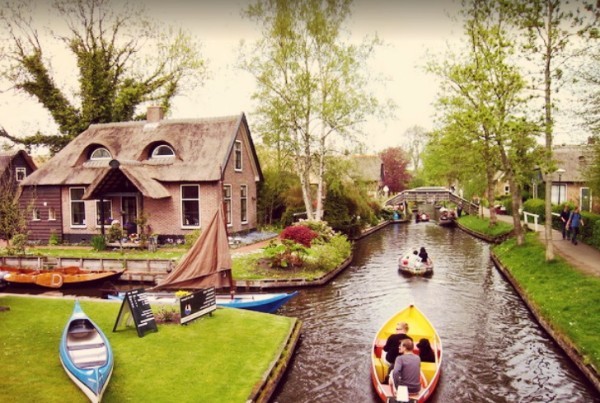 90 kilometers of canals, more than 150 bridges, many houses can still only be reached by boat. To no other place in the world, the term "Venice of the North" fits so strongly as to the Dutch village of Giethoorn.

Giethoorn is located in the province of Overijssel in East Holland, about 120 km from Amsterdam. About 2600 people live in it. If you turn to the information posted on the Internet, you can come across the statement that there are no roads and modern transport in the village, and residents only use boats. This is not entirely true, although not a complete lie. Indeed, the village is famous for its extremely extensive network of canals - there are 90 km of them.

In addition, there are more than 150 bridges in Giethoorn (according to some sources, 176 or 180). Because of this abundance of water, the Dutch call Giethoorn the "Venice of the North" or "Dutch Venice". And although I call a number of places in the world that way, in this case the name fits perfectly. The village is indeed very dependent on water transport, many houses cannot be reached except by boat, and in this way, for example, mail is delivered. Some of them stand on islands and are connected to the rest of the village by bridges.

The absence of roads applies only to the old part of Giethoorn. Today, walking and cycling paths are laid next to the canals, but earlier boats were the only way to get around this area. The village was formed in a place where peat was mined. Peat was the only fuel in the Netherlands until the 19th century. Workers dug up peat blocks and laid them out to dry. Ponds and lakes were created in places where peat was mined. Waterways and ditches were dug to carry peat. For this reason, many houses are "on the islands". The canals transported not only peat, but also goods. Boats moved wedding and funeral processions. Orthodox Protestants lived in this region.

Today, Giethoorn is one of the most important sights of the Netherlands and tourists who want to get to the old part of the city by car will still have to leave it in a special parking lot. And tourists are happy to come there. There are many rental shops in the village where you can rent a boat or kayak and explore Giethoorn while wandering through the water labyrinth.

The locals value silence, which is why the boats are equipped with electric motors and operate so quietly that they do not disturb the tranquility of the village. Translated into Russian, their name sounds like "whispering". Such a trip also gives the opportunity to see the magnificent buildings of the village, on the banks of the channels there are charming thatched houses, some of which date back to the 18th century.

The village also has many restaurants and cafes, there are three museums (about the history of the city, the automotive industry and the presentation of gems and minerals), you can also visit the Schreur shipyard, which builds flat-bottomed boats. The village takes its name from the Dutch word "gietehornes" which means "goat horn". The early settlers of Giethoorn are said to have discovered hundreds of them in the swamps here. Once the place where the village was formed was the largest swamp in Europe.