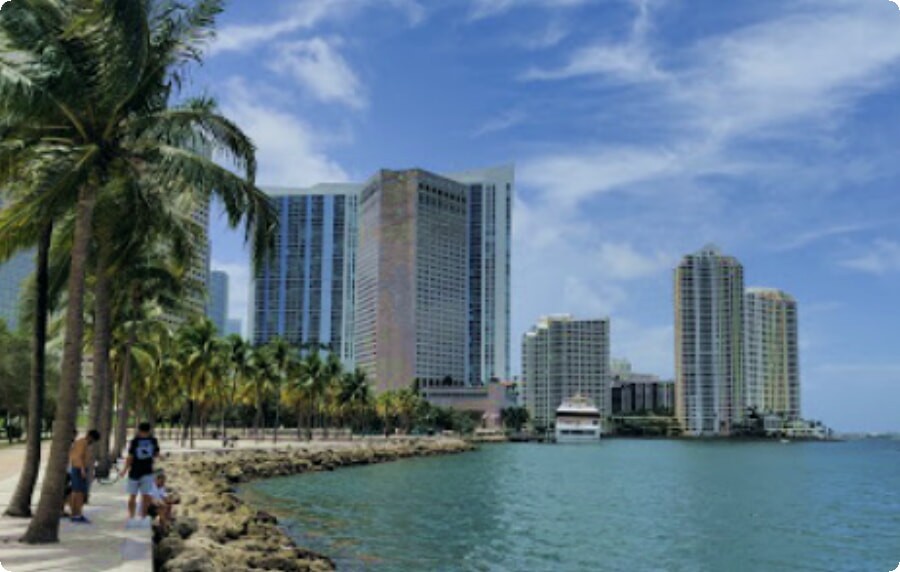 Miami is America's premier resort city. The most successful businessmen and the richest artists come here. It is located in the state of Florida and includes colorful areas and suburbs.

The main geographical attraction of this place is reputed to be Miami Beach - a resort that is connected to the mainland with the help of Biscayne dams - the Gulf of the Atlantic Ocean. Here, stretching for 11 kilometers, golden beaches are located and high-rise buildings and hotels have “grown up”.

South Beach is a beach that has gained popularity due to its picturesque scenery: the fusion of blue waves and bright sunlight. In the XX century. Miami Beach's sandy landmarks were in danger of disappearing as massive development caused severe soil erosion. But the situation was saved thanks to the engineering troops, who poured 10 million cubic meters of sand onto the "wounded" coast.

Miami Beach has the most expensive restaurants and exquisite boutiques, and silence almost never occurs on its territory. The heart of the resort is Ocean Drive, the main natural attractions of which are palm trees swaying in the wind. And the freshness emanating from the Atlantic Ocean cools even on the hottest days.

Ocean Drive is home to Art Deco hotels and fast cars. Popular models and well-groomed guys rest here. And the most successful officials and businessmen rest on the sandy beaches. In the cafes and restaurants of Ocean Drive, you can taste the most exquisite dishes of all the cuisines of the world, but the main gastronomic highlight of these places is Cuban coffee, recognized as the most delicious in the world.

On Biscayne Boulevard, in the heart of Miami, is the famous Freedom Tower.

It was erected in 1925. The office of The Miami News, the main city newspaper, was located here.

In the 50s. 20th century the tower was handed over to the authorities so that the city would have a place to accommodate Cuban immigrants.

The tower got its name due to the fact that the Cubans, hiding from the Castro regime, believed that they were able to gain long-awaited freedom in the States. Now there is a library of Cuban literature and a museum, among the exhibits of which you can find paintings, sculptures, videos, photographs, and examples of other forms of art. The attraction of Miami largely copies the style of the Spanish Giralda, a tower located in Seville. Therefore, her style is called the Mediterranean Renaissance.

Miami is a city that not all tourists will like. This part of the States is favorable to those who prefer luxury holidays. But those who can afford to plunge into the atmosphere of golden radiance are always welcome here.