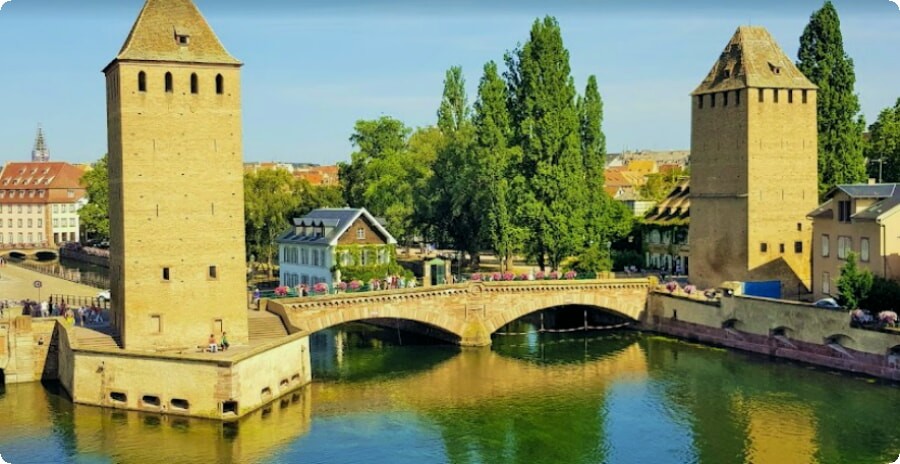 The largest country in Western Europe attracts tourists not only with the Eiffel Tower. Mountains, valleys, sea coast - France is exceptionally rich in cultural and natural attractions. There are attractions in every region and it is worth learning about them right now!

- Colmar is a town with "gingerbread" houses and a canal system, like in Venice. It was here that the Statue of Liberty was created, which was subsequently recreated on a gigantic scale in the United States. The height of this monument in Colmar is 15 m.

- Mont Saint-Michel is an abbey located on a mountain that turns into an island at low tide! To return to their place, the waves overcome 18 km!

- "Road Napoleon" in Sisteron - an impressive landscape that combines high cliffs and the turquoise expanse of the sea. The best time to visit the rock fortress is May, when Sisteron is in full bloom of lavender.

- The town of Annecy on the shores of the lake of the same name, which is located near the Swiss border. The area is famous for the decorated bridges over the street channels and the exceptional transparency of the lake water.

- The Verdon Gorge and the nature reserve around it is the French analogue of the Grand Canyon, where the riverbed lies at a depth of 700 m.

- Mont Blanc is a mountain in Europe, also the highest, on the slopes of which the Alpine resort of Chamonix is ​​located. High-altitude ski slopes and other delights of outdoor activities attract guests from all over the world.

- The Cosmonautics Museum in Toulouse is the best among European counterparts. After exploring the star exhibits in Toulouse, you can visit the ancient temples, the town hall and the Aviation Museum.

- Avignon - the Catholic capital of the Middle Ages, where the papal palace and 800-year-old city walls with 8 gates are still preserved. Tourists love this city for mostly good weather and majestic antiquity.

- Lyon is the capital of Interpol, the international security organization, located at the confluence of the rivers Saone and Rhone. It is worth visiting the Renaissance quarter, the architecture of which is still almost unchanged. An architectural monument not to be missed is Lyon Cathedral and an event is the annual festival of light.

- The English Promenade in Nice is 7 kilometers of the seashore, where you can meet the most outstanding people. The resort attracts with luxury and glamour, and offers fantastic scenery for relaxation. The azure of the sea, yachts, palaces and one and a half hundred fountains - all testify to the wealth of the city. The old quarter of Nice is filled with architecture from the 17th and 18th centuries, and there is an even more ancient fortress on the Château hill.

- Stone castles in the Loire Valley - the pride and hallmark of France, built in the Middle Ages. After reconstructions and restorations, they continue to captivate with antiquity, historical facts and legends.

For example, the Château de Monsoro from the novel by Alexandre Dumas and the castle of Langeai, built by Richard the Lionheart.

- Carcassonne - a city on a hill, as if descended from the illustrations of a medieval manuscript. Stone houses here are tightly wrapped in a double ring of walls with many towers. The slopes of the hill are uninhabited, and emerald fields and the blue crown of mountains unfold around.

- Rocamadour is a rocky town with Romanesque and Gothic architecture, where only 656 people live. This pilgrimage center houses King Arthur's sword today! The red tiles of the roofs enrich the austere landscape, and the waters of the Alzu River at the foot of the mountains reflect the sky.

- Roussillon - a village in Provence with red Martian landscapes. The local sandy soil is saturated with iron oxides, which color it with red, orange and purple colors.

- Lavender fields, amazing view of the Valensole plateau - the famous picture with even rows of purple bushes comes from here. During the summer, the fields here bloom with fragrant lavender. In the most beautiful of them - Moustiers-Saint-Marie, tourists are treated to lavender honey.