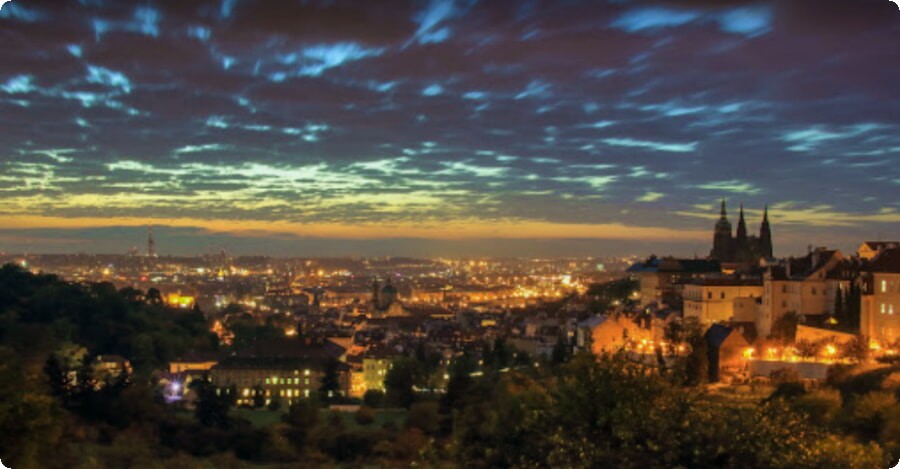 Next to the restaurant in Prague, Czech Republic, there is the now inactive Church of St. Roch (Svat Roch). The church was built in the 16th century after the plague in gratitude for getting rid of a terrible disease. But he only lasted a century. According to legend, when the next epidemic began, a peasant brought a sick cow to the temple, asking for her healing. Alas, the miracle did not happen, the cow died right in the church, which was soon demolished due to desecration. It was restored in the second half of the 19th century, but the sanctity of the place was lost. Now the church houses an art gallery.

You can not miss the Basilica of the Assumption of the Virgin Mary (Nanebevzet Panny Marie). It was around this basilica that the monastery was built and expanded. It was founded in 1140, but nothing remained of those walls for a long time - over the almost 900-year history, the temple was rebuilt many times. For the same reason, it is difficult to attribute it to any particular architectural style, there is a little bit of everything here.

Basilica of the Assumption of the Virgin Mary

But in my opinion the most interesting is the visit to the monastery library. The library collection contains more than 200 thousand books, including about 3000 manuscripts and 1500 incunabula (the first printed books published before 1501). And this despite the fact that the first collections burned down in the fires of 1258 and 1420, and in 1648 most of the books were taken out of the monastery by the Swedes. But the monks continued to collect and preserve the books.

And it was the library that allowed the monastery to survive during the church reform of Joseph II of Habsburg. In 1781, a decree was issued on the abolition of all orders and monasteries that do not benefit the cause of public education or charity for the sick. Without thinking twice, the abbot of the monastery made the library public. It was one of the first libraries in Bohemia open to the public.

Small Theological Hall of the Library

Subsequently, the collection of books was replenished at the expense of the abolished monasteries. Since the end of the 18th century, books have been stored in two luxurious rooms, the Theological and Philosophical, and in the corridor between them. There is something to see in these rooms: stucco, frescoes, ceiling paintings, walnut bookshelves, a collection of Dutch floor globes. The collection of books devoted to trees attracts attention. Each volume contains a description of a specific wood, and the spine of the book is made from the bark of that tree. In the halls preceding the library, there is a herbarium and a collection of curiosities.

Also, on the territory of the monastery there is an Art Gallery. If you have the strength, go there too. The gallery contains rare paintings and sculptures by masters of the 16th-19th centuries.

We highly recommend to go down a little and go outside the gates of the monastery. You will find yourself on an observation deck with a wonderful view of Prague. Vineyards run down the slope of the hill, luxurious Hradcany and St. Vitus Cathedral rise to the left, Petrin hill (Petn) turns green on the right. From here you can go for a walk in Hradcany and Mala Strana, or go to Petřín and climb the “Prague Eiffel Tower”. The choice is yours, the whole of Prague is at your feet.

If you walk around Hradchany, sooner or later you will come to the Strahov Monastery. You can enter its territory through several gates. For example, from the side of voz street, which goes down to Malaya Strana. But Mala Strana is below, and the monastery is above. Another entrance from Pohoelec street. If you are traveling by tram, you need to get off at the stop of the same name - Pohoelec. Trams number 22 and 25.