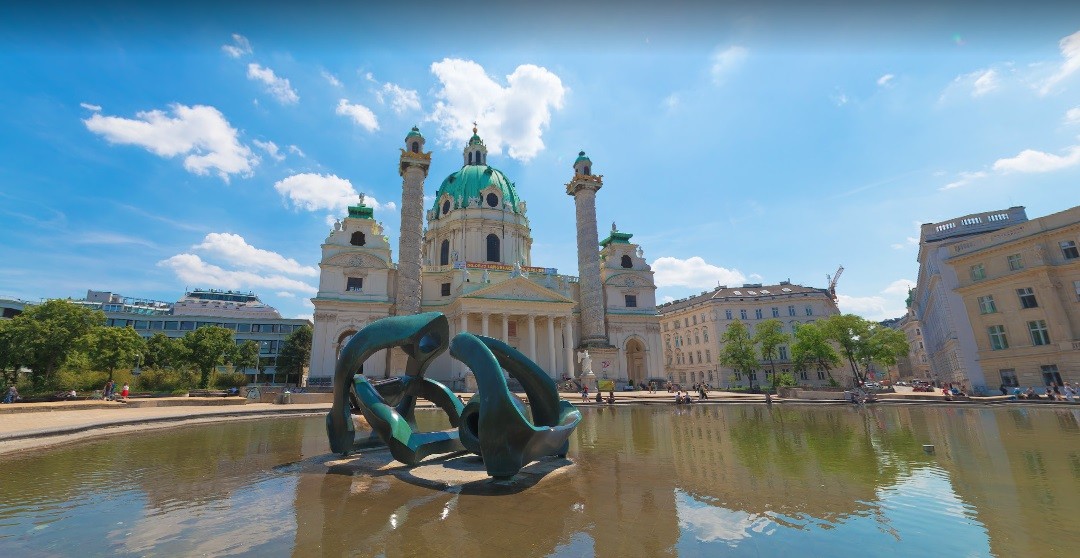 Karlskirche is an Austrian Catholic cathedral in Vienna. The name translates as "Karl's Church", it is derived from the German words Karl (Karl) and Kirche (church). It is one of the most outstanding barocco architecture. The height of the temple is just over seventy meters. The architectural style of barocco determines the presence of a rich, variegated decoration of the premises of the building, intricate patterns and several non-standard elements of the general exposition.

This style acts as an antipode to classicism. Karlskirche is not a real church. There are no services here, no bells ringing.

The building is used exclusively as a museum open to tourists. A little about the history of the creation of this amazing cathedral. 1713, in Austria the plague epidemic has just subsided. The Austrian emperor Charles the Sixth promised to build a cathedral named after his patron, the canonized cardinal, Carolus Borromeus.

The competition for the best architectural plan was won by the then famous architect Johann Bernhard Fischer von Erlach. He became famous for his works such as the Prague and Schönbrunn palaces, the Graz mausoleum. In the sixteenth year of the eighteenth century, building began. However, seven years later, Johann Bernhard Fischer died. Now the construction was headed by his son, who made some adjustments to the original plan. And already in the thirty-seventh year of the same century, the temple was opened.

It turned out not just a church, a whole work of art. It combines elements of different styles, different nations, but still remains the crown of the barocco style, and thus is interesting. Of the most outstanding elements of the structure, one can note two richly decorated columns, reminiscent of ancient Roman architecture, and a huge dome, very similar to the domes of cathedrals in Russia, in particular, St. Peter's Cathedral. The central altar is decorated very richly, however, like the whole church.

It is decorated with stucco bas-reliefs, which depict the Saint who is in Paradise among the cherubim (guardians of God) and angels. A specially converted observation platform is located under the dome; tourists are taken to it by an elevator. However, apart from the nearby territories, you can hardly see anything, the height is too frivolous for a full-scale view of the city of Vienna.

Karlskirche is a large-scale structure, erected in an astonishingly short time. For several centuries this church has been pleasing the eyes and souls of tourists who come here.